Richard Godwin has the unique distinction of having been included in every "Days of Madness" since the beginning.

During the Eight Days of Madness, Richard showed us the violence hidden just below the surface of a "regular joe" with Blister Pack. A year later, he gave us the darkest side of obsession with Schizo Numericus.  And during last year's festival of frantic flash fiction, Richard delivered the creepy, perfect delusion that was Frogs Screaming Like Crickets.

I was thrilled to have the chance to trade questions and answers with Richard in advance of this year's event. Enjoy! 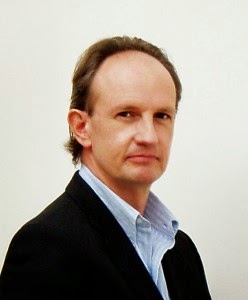 CA: Richard, you've had a story in each of the Days of Madness events since it started. Has there been anything specific about the format, or the theme that have called out to you, or that made you want to participate each time?

RG: I loved the concept from the start. I think literature and Art occupy  a position between the rational and irrational, they ought to challenge and need to subvert.

Despite the stubborn belief that we are rational creatures I believe mankind is innately irrational. This raises the question what is madness? I think that needs to be rephrased as what is sanity? No one is completely sane. Is sanity to be found in history, or the contemporaneously logical but retrospectively suicidal decisions made by politicians to wage certain wars? Are the deeds of social institutions sane? Deleuze and Guattari wrote a seminal anti-psychiatry book called Anti-Oedipus in which they argued that schizophrenics are manufactured by society. It was a post-Langian deconstructionist attack on establishment psychiatry, and while that is arguably irresponsible because schizophrenia is undeniably a serious ailment, there are issues that need to be addressed.

First, is rehabilitating someone into a system that rendered them unwell rehabilitative? If the patient is being treated by a servant of the state then what equality lies in the  transaction that is ultimately corrupted?  Is psychology a science when it is part of what it is studying, namely the human condition?

Canguilhem wrote a great article about this. I think seminal authors delve into this. Shakespeare's King Lear is in my opinion not only one of the greatest works of literature ever written but possibly one of the greatest dramatisations of madness. Dostoyevsky's Crime and Punishment digs into the irrational and exposes the impulses that drive us all in ways few novels manage to do. If we use Nietzsche's argument in The Birth of Tragedy that Art is based on a basic conflict between Apollo and Dionysus we have it. Michel Foucault's Madness & Civilisation is salutary here, he writes:

'The madness in which the work of art is engulfed is the space of our enterprise, it is the endless path to fulfilment, it is our mixed vocation of apostle and exegate. This is why it makes little difference when the first voice of madness insinuated itself into Nietzsche's pride, into Van Gogh's humility. There is no madness except as the final instant of the work of art - the work endlessly drives madness to its limits; where there is a work of art, there is no madness; and yet madness is contemporary with the work of art, since it inaugurates the time of its truth. The moment when, together, the work of art and madness are born and fulfilled is the beginning of the time when the world finds itself arraigned by that work of art and responsible before it for what it is.' 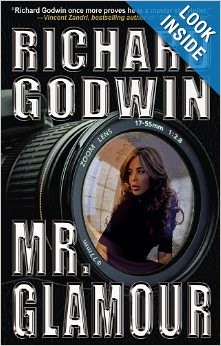 Of all my novels, the one that explores madness the most closely is Mr. Glamour. It shows that the things the sane crave are the things that lead to the madness they fear. It has at its core a relationship which sustains schizophrenia and makes it functional. Professor Jay Gertzman has called the Mr. Glamour 'an anarchist philosophical novel just as significant as those by Michel Houellebecq.'

'Passion, you see, can be destroyed by a doctor. It cannot be created.'

Here is the whole scene as acted by the great Richard Burton.

CA: Thanks Richard, I'm glad you went into this discussion, as it's been an outlying, if unspoken part of the Days of Madness series since its inception - the nature of madness. There has always been a sort of uncomfortable grey area between "madness" and "mental illness" with these events, though I think all the stories we've had have shown that there is plenty of darkness in the human psyche with which to play without doing insult to the sick.

Your work in this series has also, in my opinion, demonstrated in a very real way the keen edge between sanity and a surreal unreality that maintains enough ties to the real world to become genuinely unsettling. What do you think your reaction would be, if you woke up one morning to find you were perceiving the world as some of your protagonists do - and do you think you'd realize it?

RG: I always try to occupy the opposite position to what I am thinking, I always try to antagonise myself. As the anti-hero of my next novel says, ‘Reality is nothing more than a paradigm,’ I may not become a beetle, or inherit the past, I would simply mutate.

CA: What role do you think the artist or author has to play with respect to the evolution of the mind? Does the work merely reflect the madness, or is the very act of depiction the ultimate expression of lucidity?

RG: I think it depends on the form. A short story is a different matter to a novel. With a story an author can use a straight expulsion of energies, much like Artaud expressed in his play Spurt of Blood . In a novel exposition and evolution are necessary since, even with a non-linear narrative, the reader expects and deserves that level of dimension and depth. And the author's role is to engage that and to express it.

That may be an organic process depending on the connection to the subject matter. And again as Marshall McLuhan wrote, 'the medium is the message.' Engagement with the material is part of its expression. To show the crossing of lines, to show transgression, these are implicit in a good dramatisation of the thing called madness. Portraying the way someone becomes deranged involves the presentation of social and psychological pressures. And different cultures at different points in history view madness differently. The cult of Dionysus encouraged derangement. The poet Rimbaud sought systematic derangement of the senses. How much do we live in an age of conformity? Is the tribe scared by otherness?

And then let's not forget collective madness. The third Reich was arguably an illustration of an entire nation in psychosis. If murderous acts accompany psychosis and are backed by the law that makes nonsense of any idea of normalcy. Any account of madness on the kind of scale a novel demands needs to take into account the prevailing social forces at work and who is investing in the legal structure. There were many cases in the Soviet Union of dissenters being locked up and treated as insane. That is itself madness. Totalitarianism is the ultimate enemy of Art.

The avuncular psychopath Joseph Stalin wanted a one dimensional Art, as did Adolf Hitler. For them Art can only serve as propaganda. If you break that down what it entails is authoritarianism will not allow any questioning of its legitimacy, it labels criticism as madness. In freer societies we have an intricate set of economic systems meshing to control the economy and lives. Pharmaceutical companies are extremely powerful financially and we see the resulting medication of men and women diagnosed with mental problems. And while medication may be necessary sometimes, there is an analogy here. Both types of society are attempting to engineer personality. And implicit in the legalities surrounding medicine and medical insurance is the idea that dissent from care is madness. Does the subtext of our laws entail surrender to an engineered personality?

Returning to my earlier comment that we are irrational, I ask a question to your readers: how well do you know your own minds? Chris, maybe you will do a totalitarian or political days of madness.

CA: That's an incredibly intriguing idea, Richard. Don't be surprised if I take you up on it for Days of Madness 5.

Last question: As the veteran of the series, anything or anyone in particular you're looking forward to seeing in this year's event?

RG: I have seen all the entries and know each author will give a fine piece of madness to the event. It is nice to see one from you Chris this year. Every year has been different and what I think is great about Days of Madness is it accommodates any genre. What I hope to see above all is an unleashing of shackles, an unfettering of ties, a loss of inhibition, a shredding of clothes, the women to be Bacchanalian and the men to sup from the overflowing conch, I expect arrests by dawn, but most of all I look forward to seeing a general sense of immersion into those depths that, like Heineken, only days of madness can reach.

Thanks for the interview Chris.

CA: Thank you, Richard, for a very insightful interview as well!

***
Richard Godwin is the author of Apostle Rising, Mr. Glamour and One Lost Summer.
Visit his main website here, or check out his own renowned interviewing skills at Chinwags at the Slaughterhouse.


Richard's story, Cupboard Full of Knives, will be live on the Leaky Pencil on  Monday, March 24.

Tomorrow, we begin the Madness! 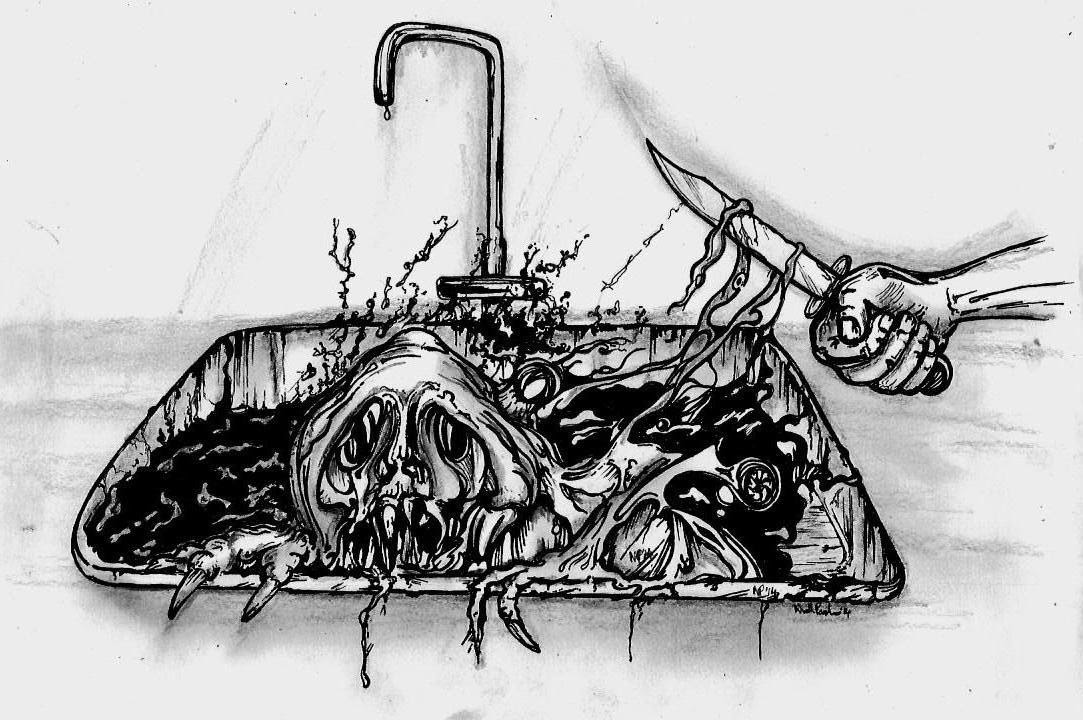